Commercialization of Polyolefin to Fuel Demand for Polyolefin Catalysts

Nearly six decades ago, Giulio Natta and Karl Ziegler discovered the catalytic polymerization of propylene and polymerization. Over the years, polyolefin has gradually emerged as one of the most produced polymers in terms of volume. At present, Ziegler polymers are increasingly being used in the production of films, fibers, plastics, and elastomers, among others. Research and development activities over the past three to four decades have played an important role in the development of new generation of Ziegler-Natta catalysts that are extensively used to manufacture polyolefins such as polyethylene, high-density polyethylene, polypropylene, etc. Considerable investments have been made to improve the traditional Ziegler process, which has enabled the development of a new generation Ziegler-Natta catalysts. In the current scenario, stakeholders in the Asia & Middle East polyolefin catalyst market are expected to devote resources toward research and commercialization of polyolefin, which in turn is expected to influence the growth of the Asia & Middle East polyolefin catalyst market during the forecast period (2019-2027). 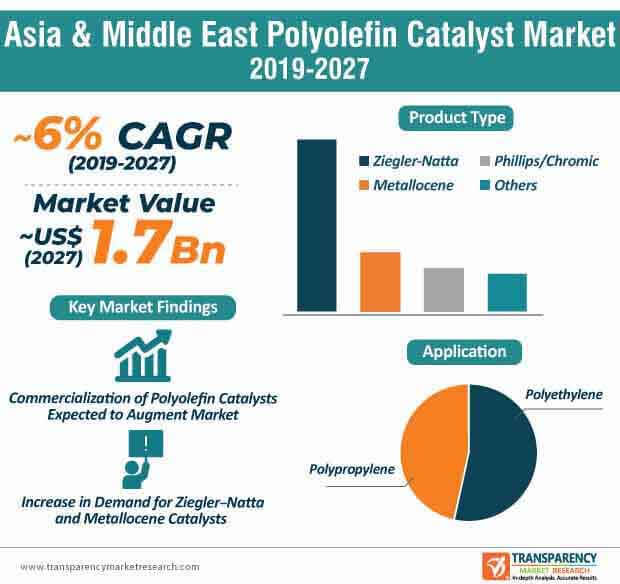 Ziegler-Natta Catalysts to Retain Popularity; Adoption of Metallocene on Rise

The application of polymers continues to expand at a rapid pace, owing to advancements in technology, biochemistry, and emphasis on research and development. Of the different types of polymers that are available, polyolefin spearheads the way in terms of production as well as adoption. The advent of recently developed methyl aluminoxane (MAO)/metallocene catalysts has unlocked the potential of synthesizing polymers with optimum properties, including well-defined microstructure, stereoregularity, and tacticity. Significant progress in polymerization was made due to single active sites on relatively new metallocene catalysts. The popularity and adoption of single-site polyolefin catalysts, including zirconocenes, half titanocene/MAO, etc., is set to grow as they have the ability to control multiple essential parameters, including the degree of linearity, molecular weight distribution, and co-monomer distribution.

Stakeholders Focus on Expansion of Product Portfolio and Strategic Partnerships

Stakeholders in the current Asia & Middle East polyolefin catalyst market are focusing on gaining market share by expanding their product portfolio and entering into strategic partnerships with other small-medium sized participants of the Asia & Middle East polyolefin catalyst market. For instance, in October 2019, PQ Group Holdings, a global provider of specialty catalysts, chemicals, materials, etc., with a strong presence in Asia & Middle East, entered into an agreement with INEOS Polyolefin Catalysts. The companies aims to fast-track the commercialization of a few polyethylene catalysts to customers. Moreover, the collaboration will also expand PQ Group’s current catalyst range and provide the company with an opportunity to gain new customers.

While collaborations, mergers, and strategic alliances are the way forward for a number of stakeholders, others are investing resources in research. 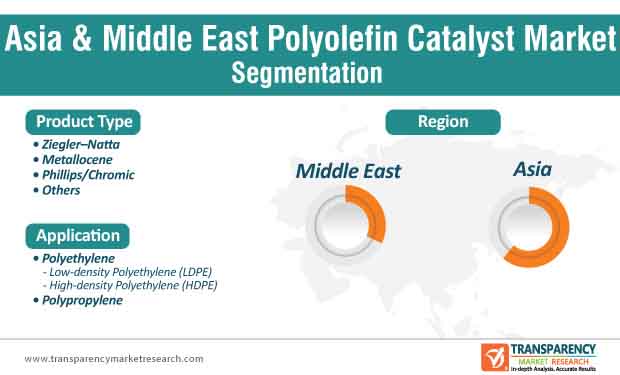 Stuck in a neck-to-neck competition with other brands? Request a custom report on “Polyolefin Catalysts Market”

The Asia & Middle East polyolefin catalyst market is expected to grow at a steady CAGR of ~6% during the forecast period. The market growth can be attributed to a range of factors, including a growing focus on research and development and increasing demand for polyethylene, LDPE, polypropylene, and HDPE. In addition, favorable properties of polyolefin catalysts is another factor that will increase the demand for the same in the coming years. Ziegler-Natta catalysts will remain the most popular polyolefin catalyst, followed by the Metallocene catalyst. Stakeholders in the Asia & Middle East polyolefin catalyst market landscape should focus on expanding their market presence through collaborations, launching new products, and adding new products to their existing portfolio.

The report provides detailed information about the Asia & Middle East polyolefin catalyst market on the basis of comprehensive research on various factors that are playing a key role in promoting growth of the market. Information mentioned in the report answers path-breaking questions for companies that are currently operating in the market and are finding innovative methods to create a unique benchmark in the Asia & Middle East polyolefin catalyst market. This helps them in designing strategies and making target-driven decisions.