The rising consumption of gasoline and lubricant additives and rubber products in the automotive and aviation industries, the expansion of existing production facilities, especially in Asia Pacific, and an increase in the bio-based production of 2-methylpropene have been known to significantly drive the 2-methylpropene market across the globe. 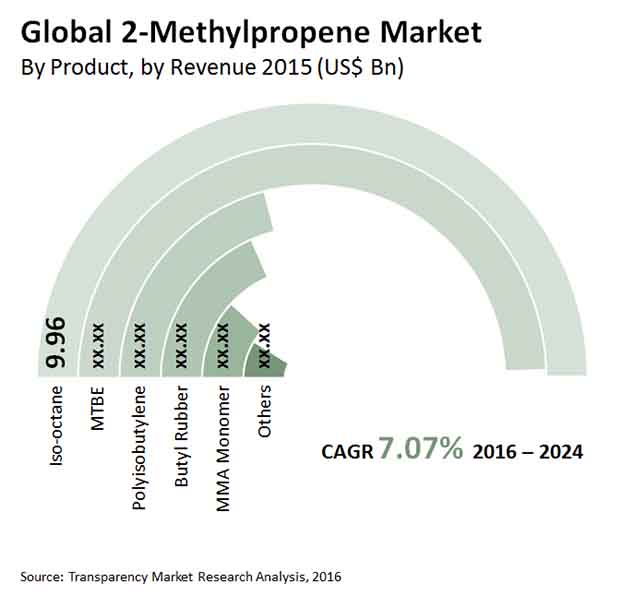 In terms of product, the 2-methylpropene market has been classified into butyl rubber, polyisobutylene, MMA monomer, isooctane, MTBE, and others. By value, isooctane held the leading share of 36.67% in 2015, closely followed by MTBE. Isooctane is used as an octane booster for gasoline and as a primary component in aviation gasoline due to its prominent antiknock characteristic. Majority of isooctane is produced in refineries by distilling petroleum. However, isooctane is also produced from 2-methylpropene. The demand for MTBE is declining and is fast being replaced by isooctane as a gasoline additive.

By way of application, the 2-methylpropene market has been segmented into rubber manufacturing, pharmaceuticals, fuel and lubricants, adhesives and sealants, antioxidants, agrochemicals, and others. In terms of value, fuel and lubricants accounted for the dominant share of 63.86% in 2015. Steady growth in the global automotive industry has boosted the consumption of gasoline and lubricant additives as well as rubber products. An increase in the demand for 2-methylpropene in the aviation and automobile industries is therefore expected to propel the global 2-methylpropene market during the forecast period.

Demand for 2-methylpropene to be Comparatively Higher in APAC

From a geographical standpoint, the 2-methylpropene market has been segmented into North America, Western Europe, Eastern Europe, Asia Pacific (excluding Japan), Japan, the Middle East and Africa, and Latin America.

In terms of value, North America constituted the dominant share of 34.16% in 2015, closely followed by Asia Pacific (excluding Japan) with a 32.16% share that year. While North America leads in terms of installed production capacity, it is expected to lose market share in terms of demand owing to the bans imposed on the usage of MTBE.

2-methylpropene or isobutene is one of the four isomers of butylene, and has been utilized in number of intermediate chemical production processes. It has been utilized in the making of gasoline oxygenates methyl tert-butyl ether (MTBE), isooctane, ethyl tert-butyl ether (ETBE). The 2-methylpropene market has witnessed strides in production technologies on the back of extensive metabolic engineering. Over the years, the focus has been to commercialize these by making some of these more economically viable. The trend has caught on momentum from the growing proclivity of players in the ecosystem to adopt bio-based production of 2-methylpropene. The trend is expected to gain traction in the next few years. Substantial advances have been made in thermochemical methods toward this end. Focus on reducing the production cost has also propelled technological advancements in the 2-methylpropene market. The adoption of anaerobic production is also attracting the attention of producers, and some are exploring new fermentative routes from sugars. The aim of making large-scale fermentative isobutene production is a key trend that may greatly shape the competitive contours of the 2-methylpropene market.

The COVID-19 pandemic and its outbreaks have inflicted some severe repercussions on the traditional models of economic growth. In many economies, several industries witnessed dramatic decline of production and demand among their business buyers. This has also considerably shaped the evolution contours in the 2-methylpropene market over the past few months. The business proposition of new manufacturing technologies might take off in this light. Some have been attracted by the use of 3D printing technologies for making equipment parts. Further, numerous players are keen on adopting new vendor frameworks and a few are mulling forward or backward integration strategies to gain a better control over the demand and supply forces in the 2-methylpropene market. Thus, new strategic models will see investment potential in the not-so-distant future, and will shape the future regulatory frameworks in the key regions.

This research study analyzes the market for 2-methylpropene in terms of revenue (US$ Bn) and volume (Kilo Tons). The 2-methylpropene market has been segmented on the basis of product, application, and geography. Geographical segmentation includes regions, which are further divided into 19 countries. The report features a detailed regional segmentation with market growth forecasts from 2016 to 2024. 2015 has been considered the base year and 2016 the estimated year, while all forecasts have been given for the period from 2016 to 2024. Market data for all the segments has been provided at the regional and country-specific levels from 2016 to 2024. The report provides a broad competitive analysis of companies engaged in the production of 2-methylpropene.

The report also includes key market dynamics such as drivers, restraints, and opportunities affecting the global 2-methylpropene market. These are analyzed in detail and illustrated in the report with supporting graphs and tables. The report also provides a comprehensive analysis of the market with the help of the Porter’s Five Forces Analysis model, which helps in understanding the factors that affect the structure and profitability of the global 2-methylpropene market. These are the bargaining power of buyers, bargaining power of suppliers, threat of new entrants, threat of substitutes, and degree of competition.

The report provides detailed insights into the global 2-methylpropene business. Currently, numerous factors drive the 2-methylpropene market. The most prominent drivers include growth of renewable energy, scarcity of energy, and implementation of stringent government regulations to minimize carbon emissions. Market attractiveness analysis was carried out for the 2-Methylpropene market on the basis of product, application, and region. Market attractiveness was estimated on the basis of common parameters that directly impact the market.

Products derived from 2-methylpropene include butyl rubber, polyisobutylene, MMA monomer, isooctane, and MTBE. Butyl rubber is synthetic rubber produced by co-polymerization of 2-methylpropene with a small amount of isoprene. Polyisobutylene is a polymer with high molecular weight, it is produced by 2-methylpropene polymerization. MMA monomer is widely employed in several applications, ranging from dental prosthetics and bone cements to contact lenses. Isooctane is used as an octane booster for gasoline and as primary component of aviation gasoline, (also known as avgas), due to its high antiknock quality. The feedstock considered for isooctane production is composed of 2-methylpropene and isopentane, which are produced in refineries through steam cracking of light gas oil. MTBE is produced by utilizing feedstock such as 2-Methylpropene and methanol in the ratio of 1.2:1 respectively. Demand for MTBE is stagnant due to implementation of stringent government regulations, groundwater contamination, health hazards, and environmental pollution. Other products manufactured from 2-methylpropene comprise ethyl tert-butyl ether (ETBE) and plastics.