Growing Demand for Narrow-body and Single-aisle Aircrafts to Propel Global Commercial Aircraft Market to US$265.71 bn by 2019

The global commercial aircraft market is expected to exhibit a 5.0% CAGR between 2013 and 2019. The global commercial aircraft market was valued at US$189.21 bn in 2012. Maintaining its predicted CAGR, the market should be valued at US$265 bn before the end of 2019. These findings are published in a market research report released by Transparency Market Research, in a report titled “Commercial Aircraft Market - Global Industry Analysis, Size, Share, Growth, Trends and Forecast, 2013 - 2019”. 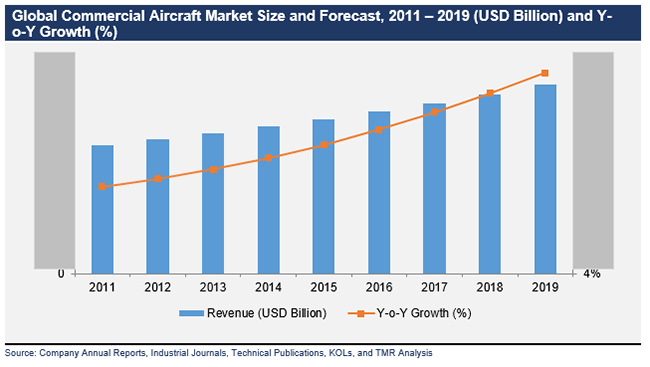 Current jet engines are also expected to be replaced in a major replacement drive soon due to the development of modern fuel-efficient jet engines.Among components, the largest revenue share in the global commercial aircraft market was held by the landing gear segment in 2012.In terms of aircraft size, the global commercial aircraft market is expected to benefit from the growth in demand for the segment of narrow-body aircraft. The key reason for this growth is the preference for narrow-body aircrafts by operators that need low-cost carriers in order to fly short-distance routes efficiently. They usually cater to both business and budget travelers that use high-traffic routes that are mostly domestic.